The largest study of its kind with more than 17,000 participants.

Over 14 years ago Kaiser Permanente and the Centers for Disease Control conducted The ACE Study [1], the largest study of its kind with more than 17,000 participants.  The purpose of the study was to see how stressful and traumatic childhood experiences influence later physical and emotional health.

The scoring system of the ACE study is simple: exposure to any of the 10 categories of adverse childhood experiences was scored as one point. Multiple exposures within a category were not scored. Therefore, the ACE score can range from 0 to 10. Only 36% of those surveyed had an ACE score of 0, and 22% had a score of 3 or greater.

“Adverse childhood experiences are the main determinate of the health and social well-being of the nation”    (Felitti, 2003)

The impact of adverse childhood experiences (ACEs) are significant and long-lasting.

5 times more likely to be an alcoholic 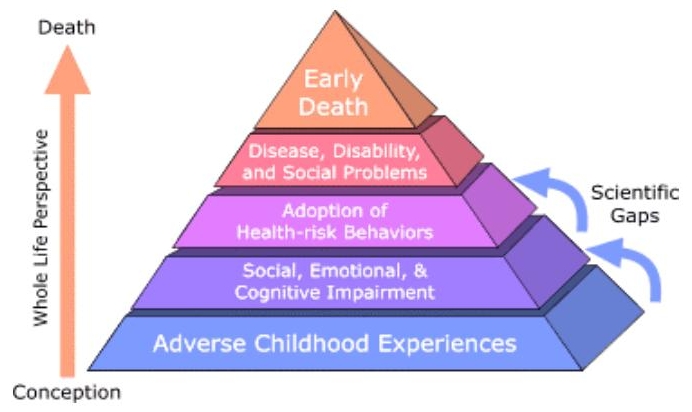 The Progression of Adverse Childhood Experiences

When a child is exposed to abuse, neglect, or household dysfunction they are prone to experience social, emotional, or cognitive impairment. They respond by choosing risky behaviors (drugs, smoking, alcohol) which results in disease, disability, or social problems, which often results in an early death.

Adverse Childhood Experiences (ACEs) affect over 60% of people, resulting in social, mental, physical, and spiritual damage. At the center of self-destructive behavior (illicit drug use, sexual activity, smoking, alcohol abuse, and overeating) is a maladaptive response to the stress caused by adverse childhood experiences.

The effects of adverse childhood experiences (ACEs) do not just go away. “The ACE Study reveals a powerful relationship between our emotional experiences as children and our physical and mental health as adults”, “It documents the conversion of traumatic emotional experiences in childhood into organic disease later in life”, “One does not ‘just get over’ some things, not even fifty years later” (Felitti, 2002).

The impact of The ACE Study has been monumental- impacting the child protective services programs of nearly every state. Similar studies are being conducted in many nations.